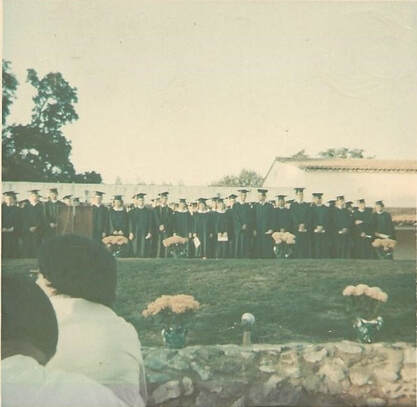 Placer High School’s origins can be traced back to 1882 when three young men from the East Coast arrived in Auburn with a dream of creating a college for Northern California. The trio met with influential members of the community in the Placer County Courthouse and began a campaign to solicit donations to the building fund of the Sierra Normal College and Business Institute. When the contributions reached $6,000, the three young teachers, M.L. Fries, A.W. Sutphen, and M.W. Ward contributed $1500 each and began to search for a building site.
General Jo Hamilton, a former Attorney General for the State of California during the 1870s had retired to Auburn by this time and built a home on an estate at the corner of what is now High Street and College Way. He donated a five-acre parcel of his land to the newly-formed school. By 1883 Sierra Normal College was advertised in the Placer Argus newspaper as “the only independent normal college on the Pacific Coast.” Normal in this instance meant preliminary, professional education of teachers. It also advertised that “students can enter at any time, select what studies they choose, and advance as rapidly as their attainments will permit.”

The first year 1897 marks the beginning of Placer High School. In that year a Professor DeBell and the City of Auburn leased the Sierra Normal College building and property and ran the school under the name of Auburn High School.
In September of that year the school began operations with 17 students present, all of whom paid tuition. Auburn High School graduated its first class in June of 1900 at the opera house, the result of a three-year study. There were 10 students, six boys and four girls—five of them attended the University of California. At the time half of the students came from towns other than Auburn. The class of ’00 consisted of Mabel Coddington, Cyrus Dickson, Marie Fulton, Myrtle Meacham, Homer Norton, Edward Peterson, Fred Peterson, Emily Roberson, eddy R. Safford, and Ernest Wood.
In the first four years student population grew and more pupils were coming from outside of Auburn. This growth required more teachers and money and in 1901 the electors of Placer County voted for a high school and the name was changes to Placer County High School. Two years later in 1903 the county purchased the building and grounds from Dr. Ward, the president and sole owner of the former Sierra Normal College.

Dr. John F. Engle became principal of Placer High School in 1906 and began a long and illustrious 30-year career in which the school expanded from five teachers in one rickety wooden building to an 800-student faculty boasting five buildings and the creation of a junior college. At the same time the high school developed a reputation throughout the state as one of the finest secondary institutions of the Placer High School District which extended from Loomis to Lake Tahoe.

Several landmark buildings were added during Engle’s stay as principal. During the 1906-07 school years the original Sierra College wooden building was torn down and replaced by a $40,000 building. The new building was a substantial brick structure consisting of 22 rooms on four levels, including a basement, and a large tin dome. Heating was by an automatic system which regulated both temperature and ventilation in every room.
Within a few years statuary, pictures, and potted plants were added to beatify the interior of the school. The library was considered one of the finest in Northern California and the collection of American history in the History department was the best in Northern California.

In 1909 shower baths and lockers for the Athletes were installed downstairs in the new building. In the next few years tennis courts were finished on the site of the old wooden building and a football field and track were installed. By 1918 the school showcased a large wooden gymnasium with sideline seating and a stage. The year 1926, however marked the beginning of a new era for Placer when the music/auditorium and science wings were added and the brick building was plastered over to match the architectural style of the two new wings. The auto shop and bus shed building along Agard Street were also constructed at this time. Ten years later, building began on Placer Junior College buildings, gym and athletic field during the final year of Engle’s administration, 1936.

Athletics began to have an impact on the school during Engle’s tenure as well. In addition of a young coach from the University of California, Earl Crabbe, enabled the girls’ and boys’ basketball teams to create a dynasties of legendary significance. Between 1916 and 1920 his girls’ basketball team went 41-1 winning 37 games in succession at one point, compiling four straight undefeated seasons. Beginning in 1923 his boys’ basket ball teams won 16 out of 17 league championships, including 12 in a row. Crabbe also coached his men to eight Central California titles in 13 appearances.

Engle was at the helm as a student endured the tragedy of World War I when a junior Red Cross Club was organized on campus with girls learning to make surgical dressings and the entire school donating over $500 to a war drive. The Engle years also saw the formation of the first high school cadet corps in the State of California under the direction of Captain Fred S. Roumage, a National Guard officer and later captain in France in World War I.

The year 1914 marked the birth of the Placer High School district, thus again changing the names of the school to Placer High School. That same year college level classes were revived after having disappeared several years earlier. However, due to the enrollment drain caused by World War I, the junior college was abandoned by 1920.

Certain ceremonies were now becoming traditional such as the Freshman Reception, the Christmas Jinx, the Junior Prom, the Senior Ball, Senior Picnic, and the Graduation and Alumni Dance. Participation in clubs and organization also grew, beginning with the Agricultural Science Organization which became the Future Farmers of America, the oldest club in existence. During the period of time the Placer Band came into prominence under the guidance of Otto Fox, entertaining the school and the community at various concerts and public performances.

Academics also took on prominence during the Engle principalship. A four year curriculum became the norm with students tracked into Classical, Scientific, or Commercial fields of study. All paths were stiffly challenging with semester finals a dreaded period of time for the students. Miscreant students were dealt with severely and Detention became an unwelcome punishment. Still, Engle and his vice-Principal E.F. Waldo were highly respected by the students and could be seen attending various cultural, social and Athletic events at the school.

By 1960 Placer High School grew in terms of physical space but reduced in population. The junior college had vacated its campus, moving to Rocklin as Sierra College, and two new high schools, Del Oro and Colfax, became part of the high school district. Placer High which began as a one-building facility in 1897 had an upper and lower campus comprised of eleven white stucco and red tiled buildings. More buildings would appear in the final three decades.

By the end of the sixties the school boasted an on-site stadium for football and track, a new library, and new history and English wings which replaced the 1906 brick building. The 1926 science and auditorium wings were renovated by the seventies and a new practice gymnasium was built behind the venerable Earl Crabbe Gym in 1982.

Students lived through highly interesting times, dancing the twist, the jerk, the swim, the watusi, and the monkey of the sixties, experiencing freedom from dress codes, and the protest of the seventies, along with some new traditions and legends. Homecoming became a colossal event beginning in 1967 when a five day celebration was declared, including a night rally, a bonfire, a Powder-Puff football game, and a dance, all a prelude to the big game against arch-rival Roseville. Senior pranks gained popularity, with one class, the Class of 1974 mounting 74 tires around the flag pole in the quad.

New faculty faces moved in to replace legends of old and create legends of their own. Glenda Gonzales created a strong music program producing the first musical, Finian’s Rainbow, in 1965 and following it nearly every year with another Broadway hit. Her 1976 choir was honored as a Bi-centennial choir, and toured the nation’s capital. The Art Department under the guidance of Mario Ferrante, exhibited student work in an annual art shows for the school and the community. The student newspaper was revived under a new name, The Hillmen Messenger, several years after the demise of the Placer Union. The Vocational Industrial Club of America came into existence in the eighties, garnering several regional and state gold medals in competitions.

Placer excelled in sports during this period of time as Tom Barry took over the helm adding to the heritage of the Crabbe and LeFebvre coached teams, and creating his own glory. His teams won eight league titles in 12 years, including six in a row, at one point in the seventies, and he retired in 1979 averaging twenty wins per season. Bill Flake began a wrestling program at Placer in 1965. Before retiring, he coached his grapplers to seventeen league championships and guided two wrestlers, Steve Stratton and Gary Anderson, to state titles.

Tom Johnson and Bill Miller teamed up as co-coaches to guide the Hillmen football program to its most successful era. From 1973 to 1982 they compiled a 93-18-1 record and five Sac-Joaquin Section titles. Three times they achieved undefeated seasons and twice they were ranked Number 1 in the state. Miller went on to coach the girls’ tennis and build a state powerhouse team that won 12 straight league championships and nine Sac-Joaquin Section titles. Radley McCord coached the boys’ tennis team to similar dominance. In the nineties, the Senior Project became a requirement for the students and the program paid off as student projects led to the Hall of Fame, an all-weather track, a Centennial Arch and brick walkway, and an art gallery among other projects. New educational concepts went into effect as well. The concept of Quality Schools became a reality with students given more responsibility to make decisions concerning their lives and education in a non-coercive environment. Finally, as Placer High School approached the end of its first century, the school applied for and received Charter School status, enabling the school to be run on independent state of education codes.